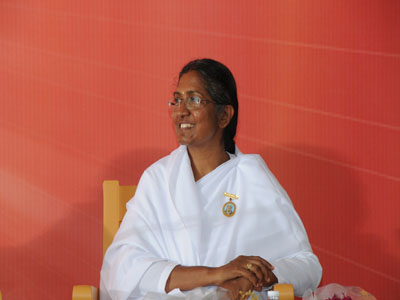 Sister BK UMA was born in Bangalore city in the year 1962, she was brought up in a well to-do family. Presently she is leading a simple life in total dedication to the Brahma Kumaris Organisation for the service of Humanity in building the core Human values to lead a happy and healthy life.

She has undergone training at Brahma Kumaris Academy for a better world at Mount Abu, Rajasthan. After having completed her education in Pharmacy, she has also served in the Hospitals of villages in TamilNadu, India.

Since her early days, she had a concern for rendering service to mankind which made a driving force in her life. Because of her good command over many languages she has been inspiring various communities through her speech.

She has empowered the individuals to bring Spiritual Values into their lives and the youth in particular to develop greater self-esteem and their in-born skills, there by making them dynamic and loyal. Her equality in vision inspired many to live together in Harmony.

As she is well-known for her love, Determination, Humility, ability to maintain a good relationship and simplicity, she has turned into a great personality and efficient administrator.

She is one of the international speakers of the organization and has travelled through many States of India and across the globe in countries like Singapore, Malaysia, France, Germany, Spain, Britain, Italy, Kuwait and SriLanka in spreading the fragrance of Love and Peace.

Her lectures have empowered the public to be more enthusiastic and developed self-confidence.

At present, under her guidance and care many branches are running successfully in serving humanity. She is the Zonal Coordinator of Medical Wing of Rajyoga Meditation and Research Foundation.

During the last two decades she has been conducting lecture programmes in various public and private sector organisations and concerns.

Few Organizations where services are done


Few of the Training Seminars

We would like to bring into limelight about some of her activities and which is as follows: