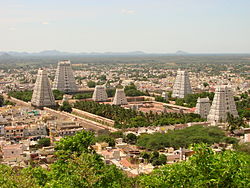 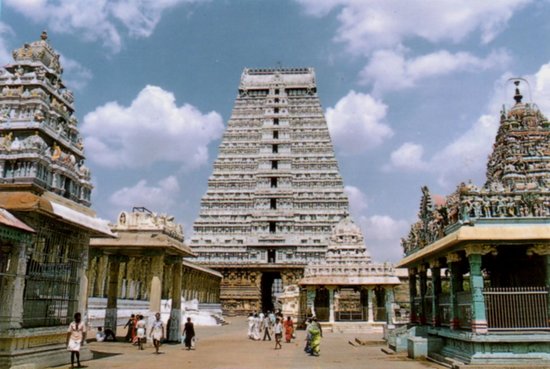 Tiruvannamalai , (also Thiruvannamalai or Trinomali andTrinomalee during British times) is a town in the Indian state of Tamil Nadu. The town is administered by a special grade municipality that covers an area of 16.33 km2 (6.31 sq mi) and had a population of 144,278 in 2011. It is the administrative headquarters of Tiruvannamalai District. Roadways are the major mode of transport in Tiruvannamalai, while the town also has rail connectivity. Chennai International Airport is the nearest domestic and international airport to the town. Tiruvannamalai is named after the central deity of the Annamalaiyar Temple, Annamalaiyar. The Karthigai Deepam festival is celebrated during the day of the full moon between November and December, and a huge beacon is lit atop the Annamalai hill. The event is witnessed by three million pilgrims. On the day preceding each full moon, pilgrims circumnavigate the temple base and the Annamalai hills in a worship calledGirivalam, a practice carried out by one million pilgrims yearly.

Located on the foothills of Annamalai hills, Tiruvannamalai has been ruled by the Pallavas, the Medieval Cholas, the Later Cholas, Hoysalas, the Vijayanagar Empire, the Carnatic kingdom, Tipu Sultan, and the British. It served as the capital city of the Hoysalas. The town is built around the Annamalaiyar Temple like other Nayak capitals. Tiruvannamalai is administered by a special-grade municipality constituted in 1886. Tiruvannamalai has an average elevation of 200 metres (660 ft) and experiences a hot and humid climate. Being a pilgrimage town, most of the people are employed in the tertiary sector. There are 25 elementary schools, nine high schools, 18 higher secondary schools, four arts & science colleges, one government medical college and four engineering colleges in the town.

In Hindu mythology, Parvati, wife of Shiva, once closed the eyes of her husband playfully in a flower garden at their abode atop Mount Kailash. Although only a moment for the gods, all light was taken from the universe, and the earth, in turn, was submerged in darkness for years. Parvati performed penance with other devotees of Shiva, and her husband appeared as a column of fire at the top of Annamalai hills, returning light to the world. He then merged with Parvati to form Ardhanarishvara, the half-female, half-male form of Shiva. The Annamalai, or red mountain, lies behind the Annamalaiyar temple, and is associated with the temple of its namesake. The hill is sacred and considered a lingam, or iconic representation of Shiva, in itself. Another legend is that once, whileVishnu and Brahma contested for superiority, Shiva appeared as a flame, and challenged them to find his source. Brahma took the form of a swan, and flew to the sky to see the top of the flame, while Vishnu became the boarVaraha, and sought its base. The scene is called lingothbava, and is represented in the western wall at the sanctum of most Shiva temples. Neither Brahma nor Vishnu could find the source, and while Vishnu conceded his defeat, Brahma lied and said he had found the pinnacle. In punishment, Shiva ordained that Brahma would never have temples on earth in his worship. In Tamil, the wordArunam means red or fire and Asalam means hill. Since Shiva manifested himself in the form of fire in this place, this name Arunachalam came to be associated with Annamalai hill and the town. The first mention of Annamalai is found in Tevaram, the seventh century Tamil Saiva canonical work by Appar and Tirugnanasambandar.

The history of Tiruvannamalai revolves around the Annamalaiyar Temple. The recorded history of the town dates back to the ninth century, as seen from a Chola inscriptions in the temple. Further inscriptions made before ninth century indicate the rule of Pallava kings, whose capital was Kanchipuram. The seventh century Nayanar saints Sambandar and Appar wrote of the temple in their poetic work, Tevaram. Sekkizhar, the author of the Periyapuranam records both Appar and Sambandar worshiped Annamalaiyar in the temple. The Chola Kings ruled over the region for more than four centuries, from 850 to 1280, and were temple patrons. The inscriptions from the Chola king record various gifts like land, sheep, cow and oil to the temple commemorating various victories of the dynasty.

During the 17th century, Tiruvannamalai came under the dominion of the Nawab of the Carnatic. As the Mughal empire came to an end, the Nawab lost control of the town, with confusion and chaos ensuing after 1753. Subsequently, there were periods of both Hindu and Muslim stewardship of the temple, with Muraru Raya, Krishna Raya, Mrithis Ali Khan, and Burkat Ullakhan besieging the temple in succession. As European incursions progressed, Tiruvannamalai was attacked by French Soupries, Sambrinet, and the English Captain Stephen Smith. While some were repelled, others were victorious. The French occupied the town in 1757 and it came under the control of the British in 1760. In 1790, Tiruvannamalai town was captured by Tippu Sultan, who ruled from 1750–99. During the first half of the 19th century, the town came under British rule

Tiruvannamalai is situated 185 km (115 mi) from the state capital Chennai and 210 km (130 mi) from Bangalore. The height of the Annamalai hill is approximately 2,669 ft (814 m). Tiruvannamalai is located at12°N 79.05°E. It has an average elevation of 200 metres (660 ft). The town is located to the east of Eastern Ghats. The topography of Tiruvannamalai is almost plain sloping from west to east. Tiruvannamalai experiences hot and dry weather throughout the year. The temperature ranges from a maximum of 40 °C (104 °F) to a minimum of 20 °C (68 °F). Like the rest of the state, April to June are the hottest months and December to January are the coldest. Tiruvannamalai receives scanty rainfall with an average of 815 mm (32.1 in) annually, which is lesser than the state average of 1,008 mm (39.7 in). The southwest monsoon with an onset in June and lasting up to August brings scanty rainfall. Bulk of the rainfall is received during the northeast monsoon in the months of October, November and December. The average humidity of the town is 77% and varies between 67% to 86%. During the summer months of April to June, the humidity ranges from 47–63%. The municipality covers an area of 16.3 km2 (1,630 ha). 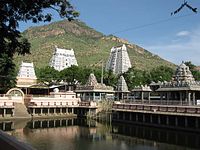 The Annamalaiyar Temple is the most prominent landmark of Tiruvannamalai. The temple complex covers an area of 10 ha (25 acres), and is one of the largest temples in India. It houses four gateway towers known as gopurams. The tallest is the eastern tower, with 11 stories and a height of 66 m (217 ft), making it one of the tallest temple towers in India. The temple has numerous shrines, with those of Annamalaiyar and Unnamulai Amman being the most prominent. The temple complex houses many halls; the most notable is the thousand-pillared hall built during the Vijayanagar period.

The Annamalaiyar temple is one of the Pancha Bhoota Stalas, or five Shiva temples, with each a manifestation of a naturalelement: land, water, air, sky or fire. In Annamalaiyar temple, Shiva is said to have manifested himself as a massive column of fire, whose crown and feet could not be found by the Hindu gods, Brahma and Vishnu. Aathara Stala are Shiva temples which are considered to be personifications of the Tantric chakras of human anatomy. The Annamalaiyar temple is called theManipooraga stalam, and is associated with the Manipooraga chakra. The temple is revered in Tevaram, the Tamil Saiva canon and classified as Paadal Petra Sthalam, one of the 276 temples that find mention in the Saiva canon.

The most important festival of the Annamalaiyar temple is celebrated during the Tamil month of Karthikai, between November and December, concluding with the celebration of Karthikai Deepam. A huge lamp is lit in a cauldron, containing three tons of ghee, at the top of the Annamalai hills during the Deepam. To mark the occasion, the festival deity of Annamalaiyar circumambulates the mountain. Inscriptions indicate that the festival was celebrated as early as the Chola period (850–1280) and was expanded to ten days in the twentieth century.

Every full moon, tens of thousands of pilgrims worship Annamalaiyar by circumambulating the Annamalai hill barefoot. The circumambulation covers a distance of 14 kilometres (8.7 mi), and is referred as Girivalam. According to Hindu legend, the walk removes sins, fulfils desires and helps achieve freedom from the cycle of birth and rebirth. Offerings are made in a string of tanks, shrines, pillared meditation halls, springs and caves around the hill.

Tirumalai is an ancient Jain temple complex in the outskirts of Tirvannamalai that houses three Jain caves, four Jain temples and a 16 feet (4.9 m) high sculpture of Neminatha dated from the 12th century and the tallest Jain image in Tamil Nadu.

The Ramana Ashram and ashram of Yogi Ramsuratkumar, located around the Annamalai hill are popular visitor attractions of Tiruvannamalai. The Sathanur Dam over the Thenpennair river located 20 km (12 mi) southwest of the town is a prominent picnic spot. This 786.37 m Dam is 44.81m high and can store 7,321,000,000 cu ft or 207,300,000 cubic meters of water. A scenic park is also present adjacent to this dam. Ulagalantha Perumal Temple in Tirukoyilur and Thiruvarangam, situated 20 km (12 mi) south of Tiruvannamalai are prominent Vishnu temples that are located around Tiruvannamalai.

Tiruvannamalai is served by the town bus service operated by the TNSTC, which provides connectivity within the town and the suburbs. There are private operated mini-bus services that cater to the local transport needs of the town. The main bus stand covers an area of 2 acres (8,100 m2) and is located in the heart of the town. There are regular inter-city bus services to Tiruvannamalai. The TNSTC operates daily services connecting various cities to Tiruvannamalai. The Corporation operates a computerised reservation centre in the bus stand of the town. The SETC operates long distance buses connecting the town to important cities like Chennai, Puducherry and Bengaluru. The major inter city bus routes from the town are to cities and towns like Chennai, Bengaluru, Villupuram, Puducherry, Tirukoilur, Avalurpet, Kanji, Chengam, Sathanur, Sankarapuram and Manalurpet.